Here are some very innovative ways of capturing kinetic energy from the sea. We need governments to give incentives to industry to develop, build and deploy these systems.  I hope the Rt Hon Greg Clark MP @gregclarkmp UK Government Department for Business, Energy & Industrial Strategy   @beisgovuk will put some ‘energy’ into #renewableenergy and not just into #fossilfuel

Yes, some are more complex than others. Cost vary as well. I like this one, which is probably relatively inexpensive:

We seem to have very few renewable energy projects in the seas around the UK which seem crazy since we are surrounded by the stuff! However this one (see below) started development in about 2008 seems to have got off the ground with funding commitment by the then Lib Dem Energy Secretary, Ed Davey in 2011. This was before the renewable energy funding cutbacks by the Conservative government elected in 2015: (click the image to go to the Guardian article). Lib Dem policy would bring renewable energy project to forefront! 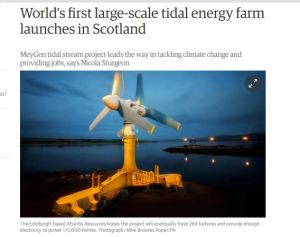 Theoretically the turbine will be the first of four to be installed underwater, each with a capacity of 1.5 megawatts (MW), in the initial phase of the project. It is ironic that just before the UK Brexit vote in June the EU awarded just over €3.9 million (£3.1 m) to support further tidal energy testing and demonstration in Orkney waters.

What happens now? Now we are coming out of the EU the other 3 turbines may not get conservative government support, – more than a pity!

We can only hope that many of the projects in the planning and testing stage do get planning consent and government backing. Here are some examples of current projects:

It is often the consenting process that takes a long time and is hugely costly to the developers and their backers because of the potential impacts on marine mammals and wildlife, benthic ecology etc with all sites being located in sensitive marine habitats.  In addition, the long term testing of new devices is extremely costly and requires consenting in its own right, like the one off Anglesey. The testing programme could run for 7 years before it becomes fully commercial!